Man-O-War, also called Man O' War or Norvagen Destroyer, is the Norvagen's battle ship. It is the second biggest set in the Krystal Wars series. It comes with 1 Dragon named Midgaard. This set comes with 12 Warriors in total, 9 Norvagen and 3 Draigar. It also contains 12 shields, 16 weapons, 2 cannons, a jail and a Krystal.

The Norvagen forces take to the seas in the massive MAN-O-WAR. Unfurl the sails and join the search for the magical Crystals of Power! 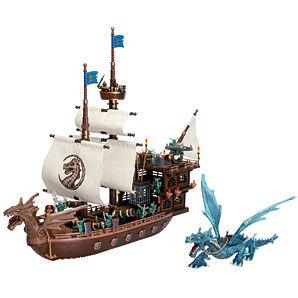 Released in 2003, the Man O' War is the Norvagen themed set of the Krystal Wars series, featuring a massive warship ready to invade the Draigar lands. It contains 250 pieces, 9 Norvagen warriors and 3 Draigar warriors, alongside the dragon Midgaard and one of the Krystals of Power. It is one of the few sets to not contain warriors from all three factions

A second ship called the Norvagen Destroyer was released for the Metal Ages series.

The Norvagen use their warships to strike and pillage any and all coastal towns that do not belong to them. The Norvagen king Ostgard keeps one of the Krystals of Power within his Man-O-War, letting him or his fellow Norvagen Warriors to mount the dragon Midgaard.

Retrieved from "https://dragonsuniverse.fandom.com/wiki/Man-O-War?oldid=5475"
Community content is available under CC-BY-SA unless otherwise noted.